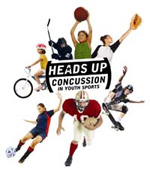 A TBI is caused by a bump, blow or jolt to the head or a penetrating head injury that disrupts the normal function of the brain. Not all blows or jolts to the head result in a TBI. The severity of a TBI may range from “mild,” i.e., a brief change in mental status or consciousness to “severe,” i.e., an extended period of unconsciousness or amnesia after the injury. The majority of TBIs that occur each year are concussions or other forms of mild TBI.2

CDC’s research and programs work to prevent TBI and help people better recognize, respond, and recover if a TBI occurs.

A concussion is a type of traumatic brain injury that changes the way the brain normally works. A concussion is caused by bump, blow, or jolt to the head or body that causes the head and brain to move rapidly back and forth. Even a “ding,” “getting your bell rung,” or what seems to be a mild bump or blow to the head can be serious.

WHAT ARE THE SIGNS AND SYMPTOMS OF CONCUSSION?

• Most concussions occur without loss of consciousness.
• Athletes who have, at any point in their lives, had a concussion have an increased risk for another concussion.
• Young children and teens are more likely to get a concussion and take longer to recover than adults.

In rare cases, a dangerous blood clot may form on the brain in a person with a concussion and crowd the brain against the skull. An athlete should receive immediate medical attention if after a bump, blow, or jolt to the head or body s/he exhibits any of the following danger signs:

• One pupil larger than the other
• Is drowsy or cannot be awakened
• A headache that not only does not diminish, but gets worse
• Weakness, numbness, or decreased coordination
• Repeated vomiting or nausea
• Slurred speech
• Convulsions or seizures
• Cannot recognize people or places
• Becomes increasingly confused, restless, or agitated
• Has unusual behavior
• Loses consciousness (even a brief loss of consciousness should be taken seriously)

If an athlete has a concussion, his/her brain needs time to heal. While an athlete’s brain is still healing, s/he is much more likely to have another concussion. Repeat concussions can increase the time it takes to recover. In rare cases, repeat concussions in young athletes can result in brain swelling or permanent damage to their brain. They can even be fatal.

If you suspect that an athlete has a concussion, remove the athlete from play and seek medical attention. Do not try to judge the severity of the injury yourself. Keep the athlete out of play the day of the injury and until a health care professional, experienced in evaluating for concussion, says s/he is symptom-free and it’s OK to return to play.

Rest is key to helping an athlete recover from a concussion. Exercising or activities that involve a lot of concentration, such as studying, working on the computer, or playing video games, may cause concussion symptoms to reappear or get worse. After a concussion, returning to sports and school is a gradual process that should be carefully managed and monitored by a health care professional.

Concussions affect people differently. While most athletes with a concussion recover quickly and fully, some will have symptoms that last for days, or even weeks. A more seri-ous concussion can last for months or longer.
It’s better to miss one game than the whole season. For more information on concussions, visit: www.cdc.gov/Concussion